Reduce and the Ferris wheel metaphor

This is a short anecddote about how I approached teaching things to someone else.

I recently had to introduce some Elm concepts to a coworker who had some experience with React and Redux. One of these concepts was List.foldl, a reduction function which exists in many languages, specifically as Array#reduce in JavaScript.

The coworker was struggling to understand the whole concept, so I tried to use a metaphor; I came with the idea of a Ferris wheel next to a lake, with someone in one of its basket holding a bucket, filling the basket with water from the lake everytime the basket is back to the ground. 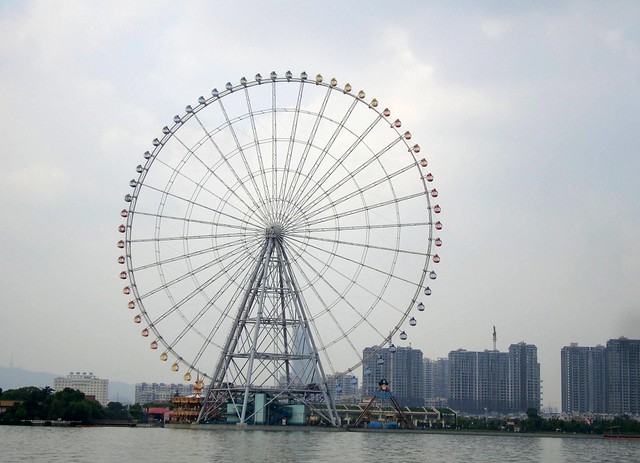 So as he was starring at me like I was a crazy person, and as I knew he did use React and Redux in the past, I told him it was like the reducer functions he probably used already.

We started writing a standard Redux reducer in plain js:

He was like “oh yeah, I know that”. Good! We could use that function iteratively:

So I could use the Ferris wheel metaphor again:

For the records, yes my coworker was still very oddly looking at me.

We moved on and decided to reimplement the same thing in Elm, using foldl. Its type signature is:

Wow, that looks complicated, especially when you’re new to Elm.

In Elm, type signatures separate each function arguments and the return value with an arrow (->); so, let’s decompose the one for foldl:

Actually our own use of foldl would have been much more obvious if we initially saw this, replacing a by Action and b by State:

Note: if you’re still struggling with these a and bs, you should probably read a little about Generic Types.

Our resulting minimalistic implementation was:

We quickly drafted this on Ellie. It’s not graphically impressive, but it works.

That was it, it was more obvious how to map things my coworker already knew to something new to him, while in fact it was actually exactly the same thing, expressed slightly differently from a syntax perspective.

We also expanded that the Elm Architecture and the traditional update function was basically a projection of foldl, Action being usually named Msg and State Model.

The funny thing being, Redux design itself was initially inspired by the Elm Architecture!

In conclusion, here are quick takeaways when facing something difficult to understand: